How to fail at user testing

Let me tell you how to fail at user testing.

Building software is tough. You spend all of your brain cells trying to release an MVP to the world.

Once you’ve released the real challenge of getting people to use your product begins.

You need people to test it to validate if your ideas are good.

The problem is everyone is busy. The last thing they want to hear is:

“I just built xyz would you mind giving me some feedback. ”

I’ve made every mistake I could have

Building Streakoid I’ve made just about every mistake there is to make with building a startup.

I started building Streakoid while I was working in another startup in London. But I wasn’t getting anywhere trying to maintain a full-time job and work on my own thing.

So I quit my job almost three months ago to work on Streakoid full time.

Once I quit I launched an ugly version of Streakoid for the world. Way before I thought it was ready.  I still don’t think it’s ready.

Ever since I’ve been trying to figure out how to get more people on it.

There’s so much noise online that it’s tough to know where to look. I’ve decided to use YCombinators learning resources as my guiding star.

YCombinator is a startup accelerator in America. Companies like Airbnb and Dropbox have wen’t through the program. They know what they are talking about.

This summer I did their online Startup School course which prepares you for the actual YCombinator.

What matters with a Startup

YCombinator hammer home the idea that all that matters is building a good product, and getting it in the hands of users as soon as possible.

Most people are ok with building good product. It’s a tough challenge, but it’s a fun one.

I’d love to lock myself away in a cave and build in isolation until I deemed my software perfect.

But that just doesn’t happen.

Your project will never be ready so it’s better to suck it up and launch, start getting some real feedback and iterate on what users say.

But once you’ve launched, you have to face the fact that no ones going to want to waste their time on testing your software for you.

I’m struggling to get users on Streakoid

I’ve been struggling to get users on Streakoid, I do not understand where to start. I want more users so they can give me feedback on the current version so I can improve it.

My most recent experiment was to use LinkedIn. Now Streakoid is no longer an MVP it’s got two paying customers and five users who use it everyday.

It’s still early days, but it’s got a website and a mobile app that people can pay for.

I’ve spent the last two months focusing on the product, with 10-20 user interviews.

I’ve hidden behind the excuse that there’s so much to build that I didn’t have time to do more user interviews.

This is a mistake.

I should have been spending some time each day to build the Streakoid community and join other communities of people struggling to be consistent because now I’m starting from scratch.

I’ve commented on YouTube videos but I’m not targeting people with any actual issue.

How I’ve been marketing so far

I’ve been posting my blogs on LinkedIn for a month now each day.

One of my streaks on Streakoid is “Write a blog post”.

Posting these blogs on LinkedIn, Medium and my website is my only form of marketing.

So I was like screw it, I’ll be direct and ask for help in a LinkedIn post. People are used to me posting blogs, so I thought it was time to ask for help. 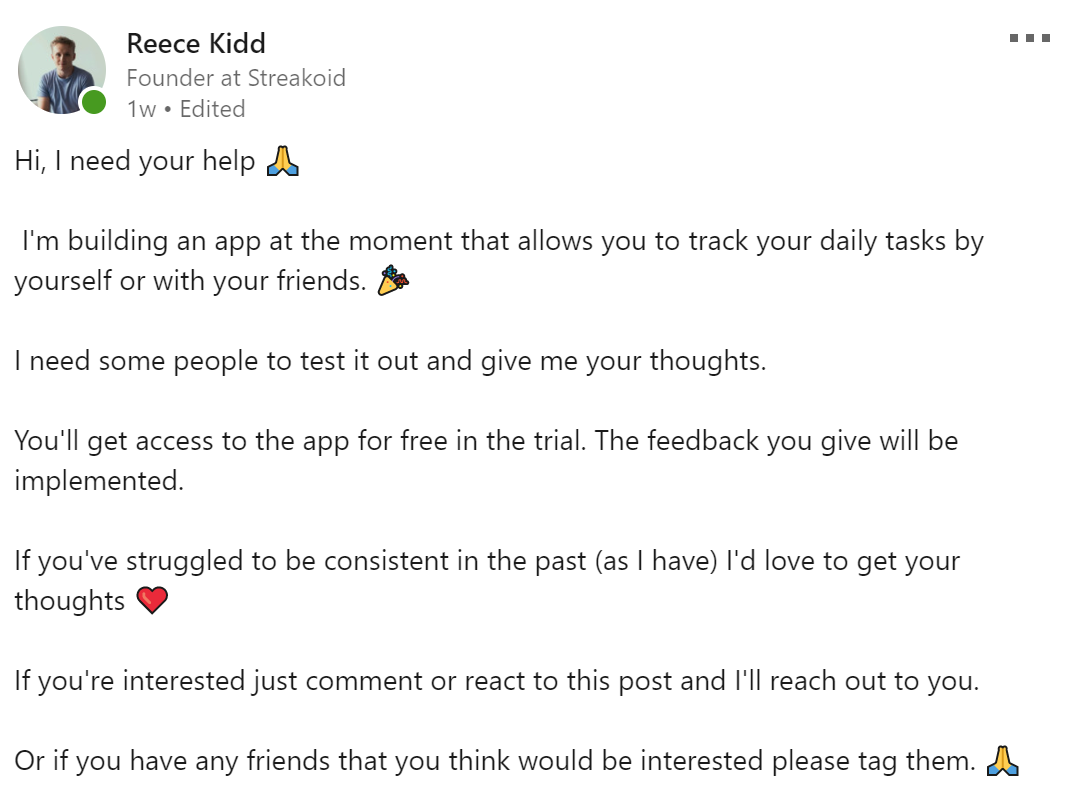 I felt good about this in the beginning. But it’s been a week now and I’ve learnt a few lessons

The introduction is fine; it’s clear I need peoples help. I’m not trying to trick anyone.

“I’m building an app” – should be I’ve built an app that allows you to track your daily habits.

Building an app sounds like a weekend hobby instead of a product.

“I need some people to test it out and give me your thoughts“ – I messed up this sentence, I should have had the respect for my readers to correct my spelling and grammar.

You’ll get access to the app in a free trial – This is confusing. No one will expect to pay when I’ve said test.

Asking to tag friends was a mistake – no one did. I should have just kept to one call to action.

I let this post sit for five days as it gathered up likes and views. I then reached out to everyone that liked it in a message.

Then things got messy

This is when the messiness started.

I didn’t know what to ask, so I asked three questions:

These were fine and led to some interesting discussions. The aim should be to understand more about the users problem.

But I then realised I had messed up because I was asking for help I couldn’t expect people to pay. This is a problem because the login and registration flows require a card on file.

I offered them free paid memberships. But they still had to enter their payment details, which seems sketchy.

Free is a mistake

Offering people free membership seems like a good idea in theory but if you give something for free they don’t value it.

If they’re not interested in paying they don’t have a problem and I shouldn’t be trying to get feedback from them.

No one on a free plan of Streakoid has ever stuck to it.

Paid members are being consistent because they value the product. Every paid member uses it every day. Paying members are on 30 or 40 plus day streaks.

But I offered a free version, realising my mistake.

Setting a paid user to free requires me to manipulate the database. Meaning I have to keep track of who’s joining and who I reached out to.

This adds a lot of complexity for myself and the users.

I waited for a day after reaching out to people, made sure no one signed up and then messaged everyone saying that the testing period was over.

The problem is, I don’t need testers. I have a product. I need users.

This “testing” is just me avoiding getting people who have a problem with being consistent onto Streakoid.

I updated the status saying that testing was closed but users can sign up at Streakoid.com for a 14 day free trial.

It wasn’t all negative

This wasn’t a complete waste. A few things came out of this. The questions people answered led to some interesting insights.

Two people helped me point out problems with the software. The first problem was that they broke the registration, (check if your registration is working before you ask people to sign up), and two that I hadn’t set up the trial because it charged users straight away.

Having live users is a great way to QA your work when you’re lacking people.

But there are a few lessons here, getting users to test can be a massive waste of time if you do it wrong.

People are busy, asking someone online to test something is is unlikely to go through.

Asking people who don’t have a problem is a waste of time. It was a mistake for me to just ask everyone in my network.

If people don’t pay they will forget about your product.

Get people with the actual problem you’re trying to solve.

Make it easy for them to get on the software.

Give them clear instructions.

Validate your ideas on actual customers.